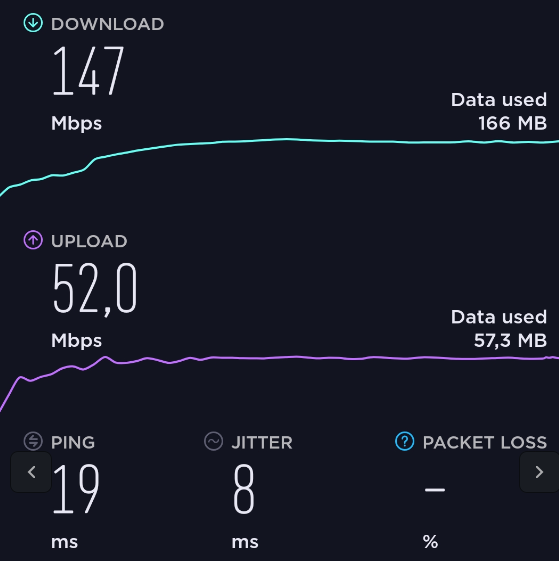 Things are good in the network when you get downlink and uplink throughput results like in the first screenshot on the left. Downlink speeds are in the 150 Mbit/s range, uplink is in the 50 Mbit/s range and the round trip delay time is around 19 ms. Unfortunately, this is not always the case. I’m a bit disappointed that I sometimes have to discover that in places such as large train stations with thousands of people in close proximity, networks are only on air with a single LTE carrier. No carrier aggregation and no small cell deployment anywhere to be seen. 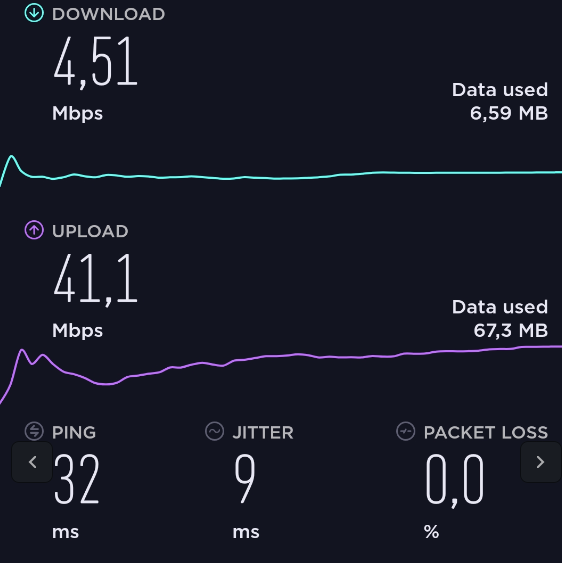 And in such places, networks are pretty much fully loaded and congested most of the time during the day. The second picture on the left shows a typical congestion scenario. Most people consume data on a large scale rather than sending a lot in the uplink direction, so my downlink speeds were around 4 Mbit/s while the uplink was mostly uncongested at 41 Mbit/s. 10 times the speed in uplink, a sight to behold.

Now you might argue that 4 Mbit/s is still quite o.k. in a train station, you can even watch Youtube videos at such a speed in HD quality. True, perhaps, but when you wait for a train and want to get things done on your notebook that involves larger data transfers, you really wished for more. Also, as people’s data consumption keeps rising, things will continue to go downhill. It’s definitely a place for a network upgrade at the earliest convenience.

But I’m writing this post because I thought the downlink throughput curve is quite interesting in the congestion scenario. What I consistently see is that for the first second or two, the network transfers data more quickly than for the rest of the transmission. Have a look at the second screenshot and the green line again. At the beginning of the speed test, my downlink data rate is much higher for a moment than for the rest of the data transmission. So I wonder if this is the scheduler making sure that reasonably sized web pages load fast while larger stuff is then averaged out with all other traffic? I have no idea if that is really the case but I do see this little hill consistently in congestion scenarios.