Yesterday I was in the Netherlands for a day and by chance it was just the day when they had a trial run of their NL-Alert system at noon that broadcast a test message to all mobiles in the country. I was quite surprised I got the message with my non-Dutch CyanogenMod Android device so I had a quick look at the technical details to find out more. 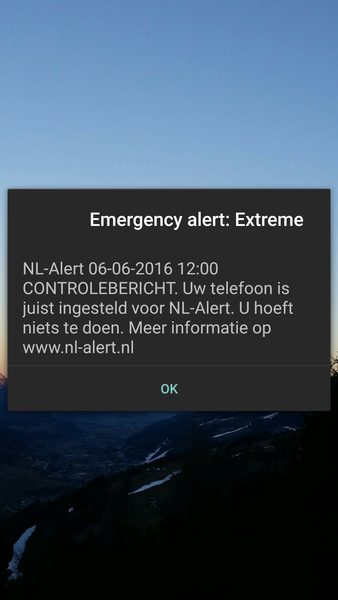 The first screenshot on the left shows the message as it was shown on my screen while I was sitting in the train. In addition I got an audible indication and another dialog box afterward that asked me if I wanted to continue receiving alerts. For a second I thought it might be a malfunction but I quickly discarded that thought as the message was in Dutch. Also I heard a discussion on a radio station in a café in Arnhem later on but couldn’t understand the details as it was in Dutch.

Anyway, the NL-Alert web site has some more information on the system for users but not much else from a technical point of view. If you don’t speak Dutch, use Google Translate to convert the web page into English. Finding technical background information on the system available in public is not quite easy. But eventually Google turned up this page for me. According to this, the system is based on 3GPP’s CMAS (Commercial Mobile Alert System) which uses the GSM, UMTS and LTE Cell Broadcast mechanism for quick message delivery. 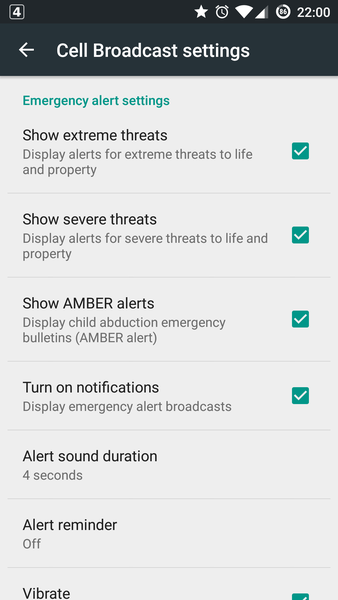 Cell Broadcast is something out of the 1990s and was used in the early days of GSM for a few applications such as displaying local area codes on the display that could be called for reduced rates or other things of interest to the general public. But network operators could never make money out of cell broadcast so there wasn’t a lot of use in most countries in the last decade. But then it was rediscovered by homeland security departments as being an ideal bearer for emergency messages to the public.

NL-Alert is the Dutch implementation of the EU-Alert system. Apart from the Netherlands, however, I’m not aware of any other country in Europe that has deployed such a system. A bit of a shame. In other parts of the world other similar systems are used such as the Earthquake and Tsunami Warning System (ETWS) in Japan for example.

So back to the question of why I received the alert in the first place since I’m not a dutch mobile network subscriber and I was not aware my smartphone even had a function to turn reception of such messages on or off. But it does, it’s in the “Wireless and Network” settings in the “Emergency Broadcast” section. Receiving emergency broadcasts is switched on by default which is why I got the message. As I am using CyanogenMod on my device the CMAS implementation must be straight from Google!