A lot of stuff is standardized but never used in real networks so I don’t bother writing about them. Recently, I saw the network provided emergency call numbers being used in practice and even though this is still an exception I put together some notes. 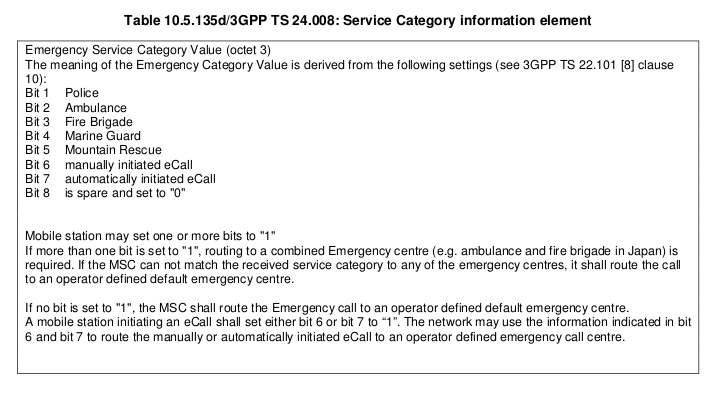 The ‘network provided emergency numbers’ feature works in exactly the same way and puts the information in the GSM, UMTS and LTE Location Update, Routing Area Update and Tracking Area Update Accept messages. Not included is the human readable service name for each entry. For details see for example 24.008, 10.5.3.13. You might wonder why I’ve included a good old GSM specification document rather than an LTE reference. Well, you can look at the LTE NAS spec 24.301, 9.9.3.37 but it just points right back to 24.008. Unlike the SIM based alternative, these additional numbers are temporary and don’t survive a reboot. Also, the device has to delete them when it registers to a network in a different country (24.008, 4.4.4.6).

So what’s the advantage of the network based method compared to the SIM card approach? From my point of view the main advantage is that it is not necessary to update all SIM cards that are in use when a country decides to split a generic emergency call center into several, e.g. for police, fire department, etc. The second advantage I can imagine is that roamers also benefit from being able to dial the emergency call numbers while being in another country. Most roamers in my opinion, however, won’t care and won’t know the local emergency number and just dial what they are used to at home. This will work perfectly fine as the number itself is not part of the emergency call.