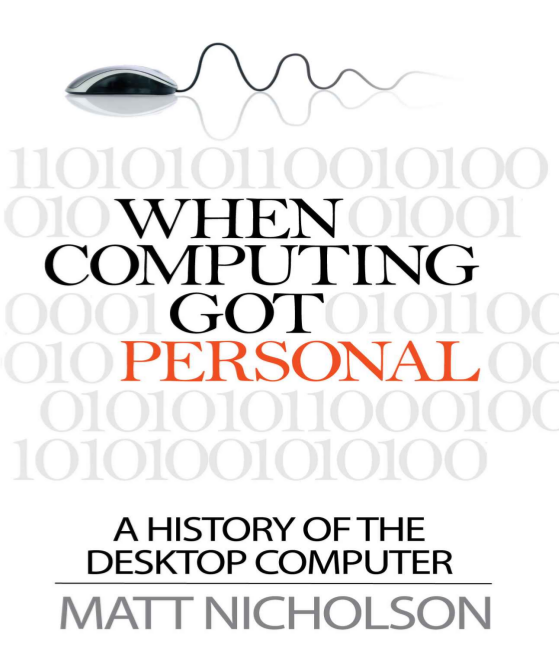 Another book I recently read about the history of computing is “When Computing Got Personal” by Matt Nicholson. It took me quite a bit to get around to this one because its approach is more holistic than the books I have read before about specific events of companies. Also it’s not as ‘Valley’ centric than the others so perhaps it has a bit less appeal to get picked up. Not so its content, however.

‘When Computing Got Personal’ starts in the era of the IBM mainframe and the DEC minis in the 1960/1970 to set the scene for the emerging Personal Computer movement and how that came about in the late 1970’s and 80’s. Obviously, the well known stories about the Altair, the IBM PC, the Apple II and how they shaped the desktop revolution are of course in the book. However, the  the author also looks at the home computer market at the time and explains how Atari and Commodore were shaping the home computing market at the time and how they and IBM as well eventually succumbed to the IBM PC clones. Also, Matt Nicholson explores how the UK home computer market shaped by Sinclair, Acorn and BBC micro fits into the context. Written in 2014 the book then goes on and describes the downfall and resurrection of Apple, the rise of Microsoft and the rise and fall of many other computer industry giants. The story about Garry Kildall, CP/M, Microsoft, IBM, DOS has its place in the book, too. He goes on to argue that despite those companies failing they nevertheless had a profound impact on the industry. Also the stories and interactions of Microsoft’s Windows, what is called Mac OS today and IBM’s OS/2 is set into the context of the time. Towards the end of the book Linux also gets a thorough treatment, especially from the point of view of other companies who were struggling with the Libre/Open Source approach that was taking the world by storm.

I thoroughly enjoyed reading this book, it gave me hours upon hours of interesting material presented in a fast paced way with many new stories being told that I wasn’t aware about so far. Fully recommended!