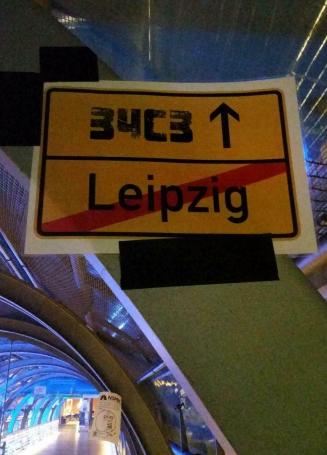 There we go again, it’s the last week of the year and while most people are trying to recover from recent festivities, ‘the Congress’ has opened its doors again. As in the previous years I’m doing a mix of attending talks and helping out with various things and here’s my roundup of day 1.

Like every year the main difficulty during the Congress is to decide what to see and what to miss, it’s just too much for four short days and nights. As all of the talks are recorded I decided this year to only attend the really really really (3x) important ones to me and keep the other important talks for later. The opening ceremony was certainly one of those not to miss with Tim Pritlove talking about the history of the CCC. While most talks I attended today were in German, many of the recordings also contain an English and French translation. To get that version click on the little ‘sun’ icon in the video player on the web page and select your audio! For those wanting to know more about CCC history, there are other videos about Wau and early CCC history on Youtube. If you can read German, ‘Der Phrasenprüfer‘ will give you even more background information.

Before and after his talk I decided to help a bit with welcoming the press to Congress and to make sure the house rules and the privacy of all participants are respected. If you’ve seen the official press coverage of the congress on TV or elsewhere you might have noticed that there are only few scenes were persons can actually be identified. And there’s a reason for that as the prime rule is that anyone that can be identified on pictures or videos must be asked for consent. I was walking through the congress with a TV crew for a few hours and at least this crew was happy to play by the rules and try their outmost to capture interesting scenes and content. From what I hear not all teams are as cooperative.

Remaining on the history track for a bit, Laforge didn’t show up with a very technical talk about how to hack cellular networks this year but instead with a talk about the early days when modems and bulletin board systems were the way to communicate electronically. At the end of the talk ‘Ray’ in the audience proposed a get together later in the day for those who would like to travel down memory lane a bit furhter. One thing I really like about Congress is that the Congress Wiki can be used to book a room on the spot and make the information about where and when available instantaneously. Quite a number of people showed-up and the discussions that followed made me wonder if I should bring some 1980/90s modem equipment to the Congress next year to re-live a time when ‘the Internet still made sounds’ (TM). Also, I started wondering if and how circuit switched data is still supported in GSM networks today, especially for incoming calls. Perhaps something to be followed up for next year as well.

Enough traveling down memory lane, the next talk I attended was by Constanze (Kurz) interviewing Hans-Christian Ströbele about his work in the past years in the parliamentary investigation committee on the NSA spying scandal in Germany (NSAua). Lots could be said about this but I leave it to the recording if you are interested in the details. One comment though: Hans-Christian Ströbele is now 78 years old but his mind is sharp as ever!

Lots of German politics on day 1 and the next talk I attended on the hack of one of the software suites used in the recent German parliamentary election was well worth seeing live. Again a talk in German but by the time you read this there’s likely a recording with an English translation (for the translation version see if there’s already an edited version of the stream available here). Even if you are not living in Germany, this talk is well worth seeing as it’s more than likely that the same kind of 1990’s software and according security measures are used elsewhere as well.

Time goes by to quickly and there are often parallel streams so I had to miss the Ultimate Apollo Guidance Computer Talk, which really hurt as I was very much looking forward to seeing this live, KRACKing WPA2 by Forcing Nonce Reuse and Markus Beckedahl’s talk on the current state of internet politics in Germany. Thank VOC for the recordings!

Final link for today: The Fahrplan (schedule) of all talks of the coming days can be found here and live streams of everything here!