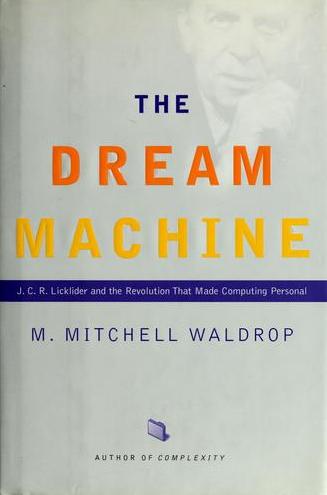 It’s been six months since my last book review on computing history and there are a number of reasons for it. Back in June I started reading ‘The Dream Machine’ by M. Mitchell Waldrop, a computing history book focusing on the life of J. C. R. Licklider. The 50th anniversary of the Apollo 11 moon landing kept me from making quick progress as I literally spent 6 weeks on that in summer. And then, this book, published in 2001 and almost 10 years in the making, is a monumental piece of work that takes quite some time to read and enjoy all by itself.

A voluminous book with over 500 pages in rather small print is not something for a weekend. The content isn’t either. Despite the book’s title suggesting it is a biography of ‘Lick’, as his friends and co-workers called him, it goes much further and tells the history of electronic computing from the early beginnings in the 1950s starting with Norbert Wiener, John von Neumann, Claude Shannon, etc. etc., from batch processing to timesharing, Project MAC, Multics, Unix, Ken Thompson and Dennis Richie at Bell Labs, PARC and the Alto, the ARPANET, the birth of personal computing, up to the end of the 1990s and the Internet boom. More often than not there are dozens of pages in which Lick is not even mentioned once, so I was even a little surprised when the author came back to him and continued his personal story before wandering off into what his thinking and actions triggered around him.

On almost every page I was tempted to stop reading and explore the story in more detail by doing additional background research. This is the second reason why it took me so long to make my way through this monumental piece of history telling. What I also liked about the book was that it doesn’t only talk about success but also of the struggles and failures of Lick, other individuals, companies and the US government during those 50 years. You can’t have it your way all the time but eventually, persistence pays off and help or a solution comes via a different path. If you want to have a look yourself, you can borrow the PDF version of the book online at the OpenLibrary project.