My Other Projects on Gitlab

In contrast to Cannes there are so many things to see in Barcelona in addition to the technology at the event which really is a huge plus. So we took the liberty for some sightseeing and relaxation and went to Gaudi´s Sagrada Familia cathedral (see pictures one and two).

In the evening another highlight of the day was the gathering of the Mobilist in the Hotel Ritz, organized by Rudy DeWaele. "It´s time to arrive before you are already there" I can read on the Treo advertisment just outside. That quite fits to that gathering. I met quite a number of people whom I only met via their blogs before and communication was instant. Thanks so much Rudy, I had many good conversations and surely met some people that I will keep in touch with. On picture three that´s Rudy on the left and David Mery of Symbian on the right

Jouni on the right and me on the left

So many things to see at the congress and so many interesting discussions that it´s easy to loose track if you don’t take notes. Here are my picks of the day:

As promissed on their blog, some of the bloggers of s60.com are in Barcelona for the week and I had the luck to talk to Jouni Juntunen, aka MKTMAN at the s60 booth (picture 1). Great discussions on S60 features (of course), Nokia policy towards blogging, the competing products and great demos at the booth.

This is the third year in a row I visited the Kineto booth who work on the integration of cellular and Wifi. The technology is called UMA (Unlicensed Mobile Access) and basically replaces the GSM air interface layer with Wifi. This year they seem closer than ever to reaching their goal as a number of mobile phone manufacturers such as Nokia have announced GSM/UMTS/Wifi phones. But these days I think they will have strong competition from SIP and Skype, especially on phones such as the Nokia N80. Their advantage: They don´t bind the user to the cellular operator as UMA does and thus could potentially be cheaper. For the user, competition is good and will have a positive influence on prices.

NTT DOCOMO of Japan combines art and technology on their booth. Picture 2 shows some mobile phone art. At the booth they demo 3G video streaming vs. HSDPA streaming at 2 MBit/s. Big difference! And they have technical experts on the stand to discuss their view of wireless evolution: 1 GBit/s, 100 MHz channel bandwidth  (compare to 5 MHz of UMTS today), QPSK and 16QAM modulation, OFDM downlink, CDMA uplink, 4×4 Mimo. Heavy stuff, but speed has it´s price.

My last pick of the day is Picsel. They have a great eMail program and file attachment handler for S60 (and Java for other phones) that removes file attachements and downloads a mobile adapted version of the document. Very fast, very slick and reduces the amount of data you have to download or store on the phone. 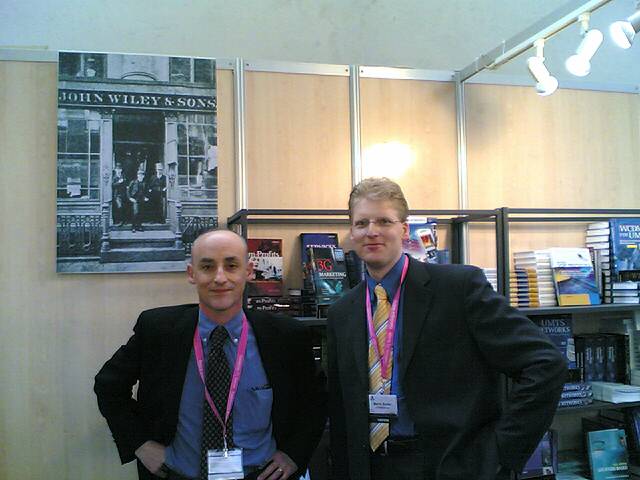 3GSM and my publisher is here so of course I have to pay them a visit to talk about the current and the next book. On the picture thats Mark Hammond on the left and me on the right.

As promissed earlier, here are some pictures of Barcelona, just Barcelona, outside of 3GSM.

Stuart, that was really a great idea! Thanks!!

Like on a Formula 1 weekend. As you can see on the pictures, there are trucks everywhere and people swarming around to prepare equipment. It is going to be great!!!

I have to admit that I had some doubts whether the plane would fly to Barcelona yesterday evening when we drove to Stuttgart airport in a snow blizzard. This morning, however, the weather was great and we made it to Barcelona without any problems. What a beautiful city, I will post some pictures in the next couple of days.

As in Cannes, the 3GSMWC decorates the city. This year, Motorola (see picture) and Samsung have plastered half the buildings between the airport and the fairground. Motorola advertises it´s cool design while Samsung points out that they are the ones with the first HSDPA mobile phone. Design vs. technology 🙂

Tip for those arriving early: Get your badge with the barcode you have received already on Sunday. Might save you some queueing time.
Sat 11/02/2006 15:08 Text note

Xen Dolev is hosting this week’s Carnival of the Mobilists. If you are interested in the mobile Internet, it is the
ressource to find out what people are thinking and in which direction
the technology is moving. Have fun!

Once upon a day, GSM authentication and encryption was quite easy. A key, a random number, a little algorithm and off you go. Seems that was too easy for some people so they came up with a new authentication and encryption system called Milenage. Very hard to find  information about this written for the ‘non cryptanalyst’. Fortunately, I’ve finally found an exception. Take a look here. Enjoy!

One thing you want to avoid at the 3GSMWorldCongress is to carry a notebook computer around all day long. So here is my equipment lineup for this year to ensure mobile blogging from the event and Barcelona in general (see pictures): Barcelona CD from Monserrat Caballé and Fredie Mercury as MP-3 files on the phone to get in the mood, Nokia 6680 with keyboard, travel guide, and a Moleskine book to take notes the Hemingway style. So watch out for the moblogs from Barcelona to come!