Ever since I discovered last year that Opera’s web browser on my smartphone was responsible for strange queries to my web server from China to generate a thumbnail image (see ‘When Opera Calls From China‘) it had been at the back of my mind that Opera is not open source and hence I have little trust in it. These days it also seems like Opera is going to be sold to a Chinese consortium which would make it even less attractive for me to continue using it. Time to change to another browser on my Android based devices then. How about Firefox?

Open Source And Respect For Privacy Are A Must

There are quite a number of web browsers for Android out there today and I obviously wanted to change to a browser that is open source and that respects my privacy. The later requirement immediately ruled out Google’s Chrome and made me have a closer look at Firefox. I tested Firefox when it first appeared on mobile but came away unimpressed. That was some time ago, however so it might have evolved in the meantime and Opera seems to be no option anymore in the mid to long term. So here’s what I think about Firefox after using it for two weeks:

The Things I Didn’t Like About Firefox on Android

The bad news first: Like a year or two ago when I first tested Firefox, scrolling is still just horrible when compared to the ultra smooth experience of Opera on Android. One gets used to the occasional stutter in Firefox after a few days but it is still not pretty. The second big issue I have with Firefox and most other mobile web browsers is that they have don’t have a text reflow feature when zooming into a web page. On Opera this works perfectly and lets one read non-mobile adapted web pages at any zoom level as the text is immediately adapted so one doesn’t have to scroll left and right all the time. The need for such a feature has somewhat diminished over in recent years as many web sites now detect the use of a mobile web browser and small screen size and adapt automatically. But every now end then I still get a page that hasn’t heard of mobile screen sizes yet and I really wished Firefox would have such a reflow feature. In the past two weeks I’ve been desperate enough twice to copy and paste a URL from Firefox into Opera so I could view the websites properly. That’s probably not often enough to stay with Opera but too often not to miss it. 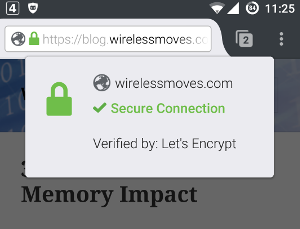 Fortunately there are a lot of things I like in Firefox on Android that Opera doesn’t have. First it’s open source so I have a lot more trust in it than in Opera, which closed source and proprietary. I’m still waiting for Firefox on Android to properly support HPKP (HTTPS Public Key Pinning) as my bug report from half a year ago is still open but I can at least see now if the issuer of the certificate has changed. Not perfect but better than nothing. Bookmarks, tab management and history work a bit differently from Opera and it took a bit to get used to the Firefox way. Eventually I adapted and it’s no longer an issue now. 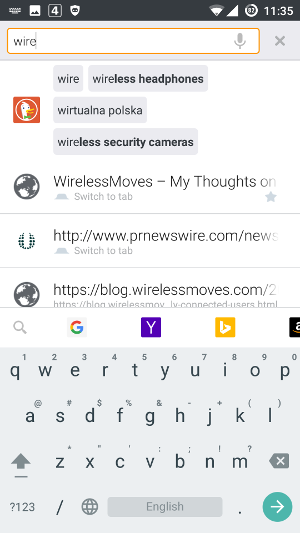 One very positive thing is that I can now select which search engine to use for each query, which search engine is set as the default and there is even an option to add and delete search engines. I really like this feature as in Opera, Google was always the default and I couldn’t easily add other search engines such as DuckDuckGo. And to round off the things I like about Firefox on Android it lets me install add-ons such as Adblock Plus which let’s me add filter lists to also remove brain dead EU cookie notifications. Ad blocking is not a feature I would necessarily need it in the browser as I make use of a modified ‘hosts’ file on Android to null-route requests to advertisement platforms (see here and here). Still, it is nice to have.

In the end I’ve decided to stick to Firefox despite its scrolling issues and its inability to reflow text. In return I get an open source browser that works well enough and I can remove yet another blob of black box software from my mobile.