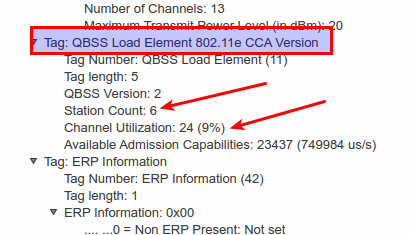 Out of curiosity I tend to make a Wifi and cellular network scan when I am at places where I think I might find interesting configurations. When I was recently at a location that deployed Cisco Aironet Wifi Access points I was surprised to find an information element in the beacon frames that contained information about the number of clients connected and the system load (amount of time the access point found the channel busy).

I was surprised because the ‘QBSS Load Element’ is optional and I’ve never come across it so far. The screenshot above is a partial view of the Access Point’s beacon frame as shown in Wireshark. At the time I took the screenshot 6 devices were connected to the network and load was at 9%. A bit later during the day when lots of people filled the room, the count went up to 85 devices. This is how the same information looks like when queried from the Linux command line:

Too bad the information element is optional and rarely used.