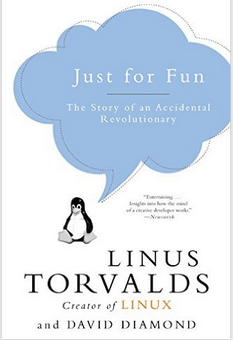 15 years ago back in 2002, Linux Torvalds wrote his auto-biography together with David Diamond and the book has been on my reading list for quite some time now. Recently I finally got around to it.

Written back in 2002, the book itself is now a historical artifact and it’s interesting to read it from a 2017 perspective when, compared to back then, Linux seems to have grown into almost any electronic device that has more than a few transistors inside. But even back then, Linus already predicted that Linux will be in mobile phones. I guess not many people could imagine that in 2002. Also at the time, the Linux kernel was ‘just’ 10 years old and still very different from what it is today.

Many stories have been written of how Linus started the project and how things have evolved since then. So this book definitely is the first hand source to separate myths from facts. The title did not overpromisse, the book is fun to read and you learn a lot about the “accidental revolutionary” that perhaps makes one understand a bit better why Linus sometimes acts as harshly as he does in public and why he prefers to be an engineer and not CEO of a multi-billion euro company.

Two thumbs up for the book, which, by the way you can still get in print but also on archive.org if you want to go for the ebook version.