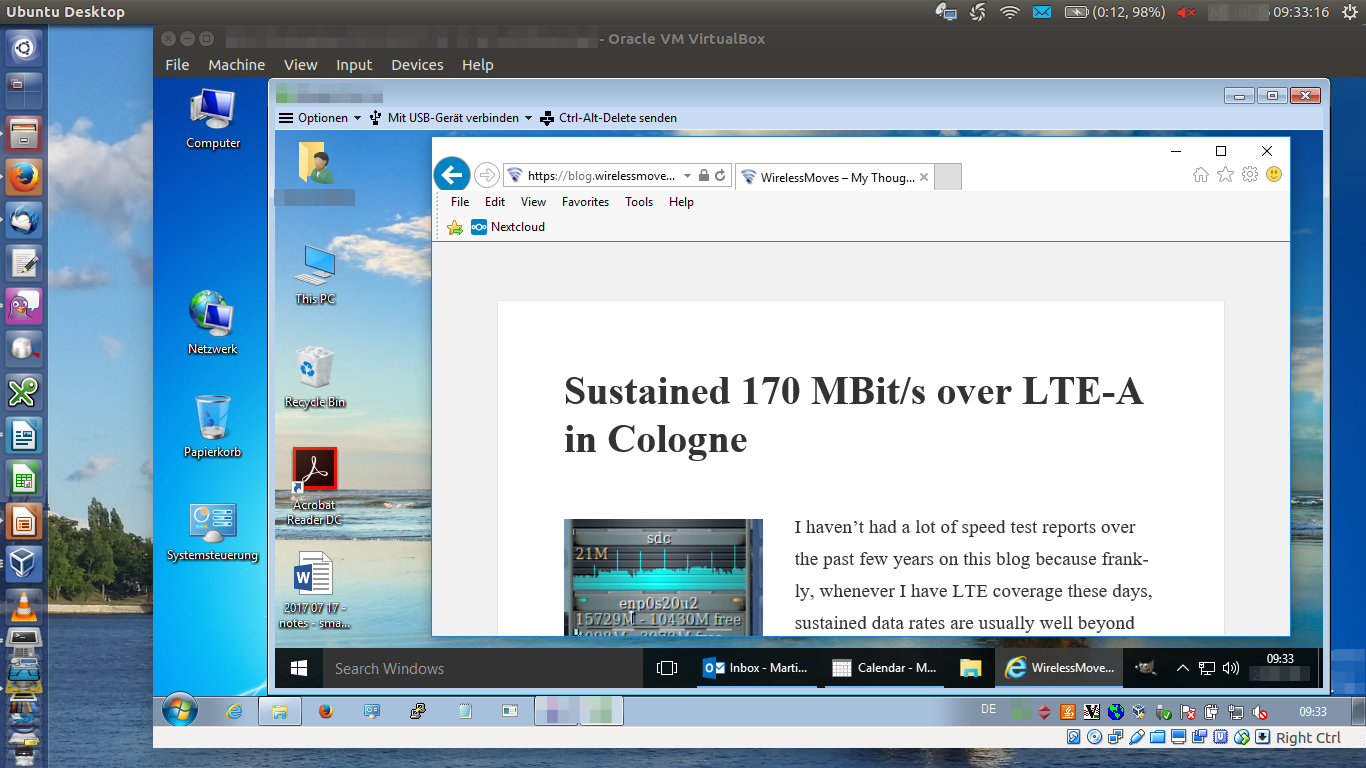 When I travel on business I usually have two notebooks with me as I like to keep things apart from each other. It’s a bit of a pain, especially in conferences when desk space is limited but the setup has served me well over the years. When I was recently on business travel I decided I take the chance and use a virtualized instance of one of the two computers and run it on the other.

In this setup, the applications I use on one computer run on a virtual machine on a server somewhere on the Internet. Locally I used a remote desktop viewer to access the Windows 10 graphical user interface of the remote machine. As the remote viewer is a proprietary program I was not keen on running the viewer directly on my Ubuntu machine. Instead I chose to run it in a Windows 7 virtual machine on my notebook. The screenshot on the left shows how this looks like in practice: The Ubuntu 16.04 desktop is on the outer side and the first Window shows the Windows 7 GUI running in a virtual machine. In the VM, the next window belongs to the remote desktop viewer showing the Windows 10 desktop running somewhere in the cloud. By going full screen on the Windows 10 desktop all outer windows disappear and one only sees the Windows 10 desktop. Now imagine running Webex or another remote viewing program for an online meeting in this setup in full screen and you really loose any perception of where you actually are (local -> VM -> remote desktop -> even remoter desktop).

I tried this setup in practice for two weeks before going on a trip and apart from a very short delay when pressing a button or changing from one window to another it worked perfectly. I wouldn’t want to use the solution all the time because the delay *is* noticeable but for traveling and for a limited time this compromise beats taking a second notebook. One additional challenge was that my first trip I used this solution with went from Europe to the US. Due to the inevitable additional delay due to the distance the solution was yet again a bit more sluggish. Again, I wouldn’t want to use the remote viewer as my main solution to get work done on a daily basis but I still preferred this compromise compared to taking another notebook with me. As is often the case with Wifi Internet access offered during conferences it was too slow and had too much packet loss to make this setup effective. However, the hotel provided in-house cellular coverage and by tethering to my phone the setup was usable. From a data consumption point of view, things were also o.k., the remote viewer required a couple of hundred megabytes per day which my monthly data allowance on my mobile contract could easily handled.

An interesting experience and I’m looking forward to using it again on my next trip. Finally a cloud based solution I’m not in control of that makes sense to me…