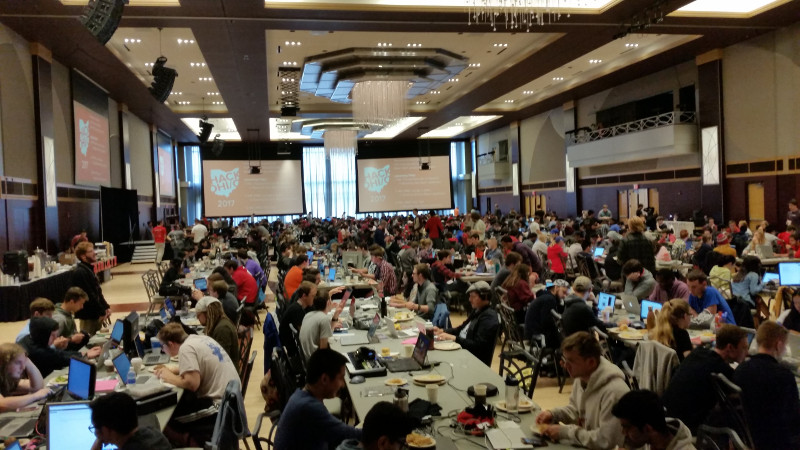 Wi-Fi is the Internet access technology of choice just about anywhere indoors these days. But just how many people can you connect with Wi-Fi in a small space and still get acceptable (my definition: > 10 Mbit/s) datarates?

I don’t have an absolute answer to this but when I recently stumbled into a Hackathon at Ohio State University it was an interesting place to check this out. According to the organizers and also seen in the picture on the left, the Hackathon was held in one big room with about 600 to 700 people with their computers, smartphones, etc. in the room. I decided to join them and run some speedtests to see how the Wifi network was doing in the room. To my positive surprise I could reach sustained data rates of well over 15 Mbit/s while there and while walking through the rows I could see that many people were using online resources and videos to get background information on the projects they were working on.

I also did a quick site survey of how many Wi-Fi channels were on air and as can be seen here, most 5 GHz channels were used. I didn’t check if and how often each channel was re-used but based on my speed test it was obvious that the Wi-Fi installation had no problem supporting the huge number of devices in the room.