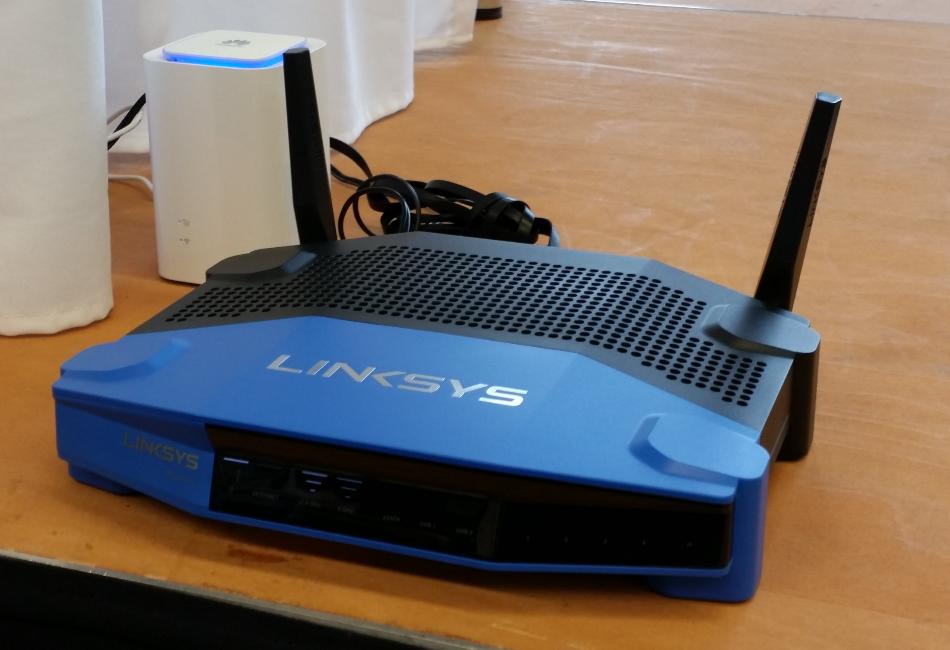 From 2011 to 2013 I provided Wifi Internet connectivity with backhaul over LTE or 3G at quite a number of meetings for 50 to 100 people in hotels (see my reports from back then here and here). In those days the hotel Wifi networks could often not handle the load and the number of Wifi devices and at some point would simply crash or run out of DHCP leases. At some point things improved somewhat so I no longer had to do this. Recently, however, I hosted a meeting myself at a location where I was not quite certain that the in-house network would meet my expectations so I decided to provide Internet connectivity myself again. Things went very well and it was quite interesting to see the differences to 5 years ago.

One of the most crucial points is to have enough capacity in the uplink direction. With 60+ devices in the network, most of them notebooks, a slow 1 Mbit/s DSL uplink immediately becomes saturated and thus blocks downlink traffic throughput for everybody else in the network continuously. This is why I used traffic shaping in the past to make sure individual users could not saturate the uplink. This time, I chose not to use traffic shaping as the LTE backhaul channel provided a speed of 80 Mbit/s in the downlink direction and a massive 50 Mbit/s in the uplink direction over an LTE 20 MHz channel at 1800 MHz at the location where I placed the router.

The screenshot above shows how the downlink traffic looked like. Most of the time, downlink traffic was around 5-8 Mbit/s and uplink traffic around 1.5 to 2 Mbit/s (i.e. this would have created severe problems with DSL-like 1 Mbit/s uplink capacity…). When some devices started downloading data, the channel could get quite busy but never quite reached the 80 Mbit/s that was available. The screenshot below shows a period when there was both uplink and downlink traffic on the channel. Some devices occasionally had quite some data to transfer but round trip times on other devices just went up from 30 ms to around 100 ms during those busy uplink times.

The total data volume used per day was around 25 GB, consumed during 10h meeting periods. That’s just around 6% of what the channel was capable of, so I’m pretty confident my setup would have supported significantly more than 60 devices. The screenshot below shows the downlink/uplink traffic ratio, which was about 4:1.

As Wifi is not designed to serve many devices in parallel efficiently I brought several access points to the meeting and planned to lower their power output and distribute them throughout the meeting room. I was a bit adventurous and started with a with single Linksys 1200AC access point (for details why I selected this router see here and here) to see how far I would get:

The router was configured to offer a 20 MHz 802.11n channel on 2.4 GHz and an 80 MHz 802.11ac channel in 5 GHz. Unlike 5 years ago, all but 4 of the 60 devices served by the network were on the 5 GHz channel. A bit over 50% of the devices, including many notebooks, supported 802.11ac and could thus use the full 80 MHz channel. The other half of devices that ‘only’ supported 802.11n were mostly notebooks, judging by the device names given in their DHCP requests. That makes sense as notebooks were not the first devices that picked up the better Wifi standard and are not replaced by newer models as often as smartphones. In other words, my rough estimate is that around 35-40% of the notebooks in the network were 802.11ac capable.

Much to my surprise, there was no need to set up additional access points on different channels. As the screenshots show, the single 80 MHz channel was enough and always provided ample capacity despite the high number of devices present. Quite different to 5 years ago when most devices only supported the 2.4 GHz band and I had to configure 20 MHz channels, switch-off fancy Wifi features to improve stability and use several access points, as the throughput per channel was limited to around 15 Mbit/s.

Also interesting to see was how many entries were present in the NAT translation table for 60 devices. Many people used VPN tunnels which only required one entry. But still, there were often well over 1500 simultaneous TCP or UDP connections open as can be seen in the screenshot on the left, which is around 10% of the maximum default value. I also had a look at the access point’s processor load during times of high throughput which never went beyond 10%. I was also very positively surprised about stability of the setup. While 5 years ago, my Wifi access points would crash every now and then and required a power cycle, the setup was rock solid this time and not a single reset was required over all 3 meeting days.

So compared to 5 years ago, I only needed a fraction of the hardware as a single Linksys 1200AC Wifi access point and one LTE backhaul router was enough to easily handle 60 devices. That significantly reduces the amount of hardware to carry along to a meeting. I’m pretty certain that 100 devices wouldn’t have been a problem either. And one final thing I noticed is that compared to 5 years ago, many people have stopped bothering with hotel Wifi and just used their phone to tether their notebooks.

Great stuff, it has never been easier to provide Internet connectivity at meetings!