It’s been a classic this week: I was just about to start giving a lecture when I noticed that my servers at home were suddenly not reachable anymore over my main (VDSL) backhaul link. The lecture begins and no way to investigate what is going on… Well at least I knew that my backup connectivity would come up and service is restored automatically.

I noticed during the lecture that the DSL link came back into service and when I checked a bit later what was going on, I was surprised to see that VDSL vectoring had been activated on my line. As I keep making screenshots of the connection parameters of my line to see how things change over time, I noticed a number of interesting things.

The first thing that becomes obvious is that the line rates are different. While they were 51 Mbit/s down, 10 Mbit/s up, they climbed to 69 Mbit/s down, 27 Mbit/s up. Also, it can be seen that the DSL protocol was changed from VDSL 17a (ITU G.993.2) to VDSL2 17a G.Vector (ITU G.993.5). Also, it seems that at least the DSL line card was changed, as I was previously connected to a line card with an Infineon DSL chip, which was replaced by a line card with a Broadcom chip. Despite the higher line speed, my up- and downlink speeds remained at 50/10 Mbit/s, however, which is what I’m currently subscribed to. In other words, there must be some sort of traffic shaping a bit further up the pipe!

It seems this was only a ‘first shot’ configuration as a few days and a few line resets later, things have changed yet again. The following screenshot shows that I’m still on vectoring but my line speed is now back to roughly 55/10 Mbit/s.

The next screenshot shows some more line parameters after the third restart from the network side in as many days. While at first activation of vectoring, carrier configuration ‘B43’ was used, this has now changed to ‘B43c’. One difference I could see is that the pilot channel is no longer around 7 MHz but has moved down to around 3 MHz. 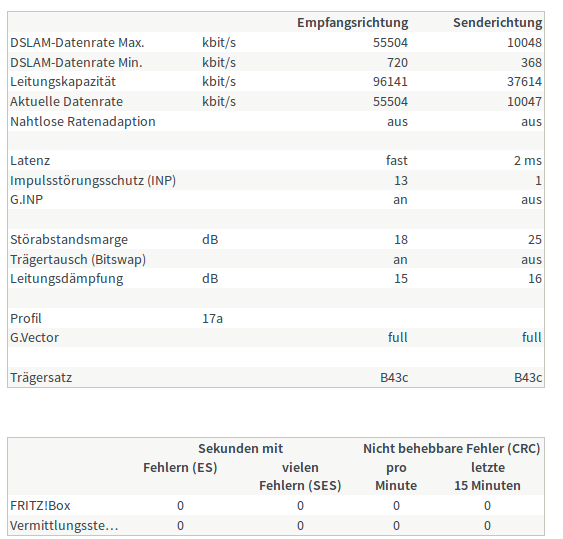 And one more screenshot that shows just how much vectoring improves the signal to noise ratio on my line. In the top-most graph, one can see that vectoring was activated on Wednesday mid-day and the signal to noise ratio has significantly improved. I don’t know why it decreased again on Thursday, perhaps vectoring was switched off again (notice the line reset in the bottom-most graph that took place at the same time). And then on Friday, after another restart of the line, the signal to noise ratio went up to an even higher level. This was probably caused by changing the line rate down again to my subscription levels. So before vectoring activation at my subscribed speed level, the SNR was around 9 db and went up to 19 db at the same speed level in combination with vectoring. 10 db, that is a 3 times improvement! 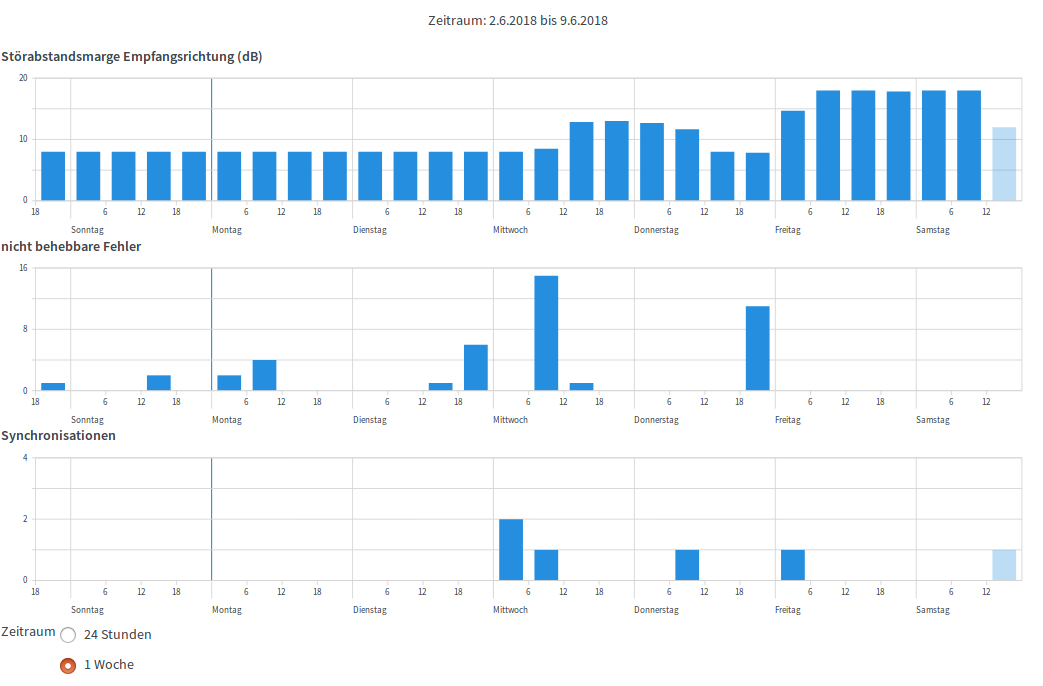 The a final screenshot for today shows the signal to noise ratio for uplink (green) and downlink (blue) portions of the spectrum over the frequency band. The areas used for uplink and downlink are still the same as with the non-vectoring configuration. What keeps me puzzled for many years now is why the SNR drops until around 2 MHz and then significantly improves after that!? Any ideas?

I’ll keep observing my line for a bit longer and when things have become stable, I’ll upgrade my tariff as I’m really keen to increase my uplink speed from 10 Mbit/s to 30+ Mbit/s. The services I host at home thirst for uplink speed so this is definitely a welcome upgrade!