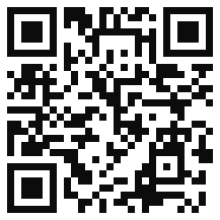 2D barcodes on mobile devices have been around even before the advent of 3G networks. The first time I mentioned the technology on my blog was in 2006 but for more than a decade, nothing much was done with the technology, at least not in Europe anyway. But now, 13 years later, I catch myself actually using them for a variety of things and I noticed how ideal they are to send digital information through space and time over quite unexpected channels.

In recent years, presenters at conferences have discovered the usefulness of 2D barcodes, especially for the final slide of their presentations. In addition to conventional contact information, a big 2D barcode is now also often shown that typically encodes the URL of their website. This way, people in the audience don’t have to remember a URL or take a picture of the slide but can just use the 2D barcode scanner on their smartphone to grab the URL for later use. What’s also interesting is that this also works when watching the video of a presentation later. With a reasonable resolution of the video, I had no problem to scan the barcode right from the screen while the video was running. If you will, this sends digital information in a video through space and time. An interesting transmission medium if you think about it. The opposite of steganography.

And just to set this into a historic perspective: Back in 2006 I wrote about a 2D barcorde advertising campaign by Nokia in Paris. That was 13 years ago! At the time, mobile data was paid by the kilobyte so I was speculating at the time that 2D bar codes were nice but as long as users had to pay for the content that is downloaded when scanning the barcodes, this would probably not fly. So it’s good to see that times have changed. Change was slow, however, as 2D barcodes pretty much never really made it to the mainstream for another decade. While walls were plastered with 2D barcodes in Asia in that decade, the first time I really noticed a 2D barcode again in Europe was in 2011. But again nothing after that for a number of years.

From a recent history perspective, I have used 2D barcodes for a number of other things in the last two to three years now. Apart from the occasional web site URL I get via a barcode, they are very handy to use as an out of band method to confirm identities with secure messengers such as ‘Conversations’. Also, I found them quite useful to get the credentials for encrypted public Wifi hotspots instead of typing in the password by hand. So hey, 2D barcodes are finally here to stay!

How To Generate 2D Barcodes Yourself

In the meantime, there are also quite a lot of browser based 2D barcode generators available. Unfortunately, most of them are not very privacy respecting. That’s why I was very happy to learn about a privacy respecting barcode generator Firefox add-on in the Lightning talk of Rugk at day 2 of 35c3. And a final note for those looking for an open source barcode scanner: Have a look at this app in the F-Droid store.