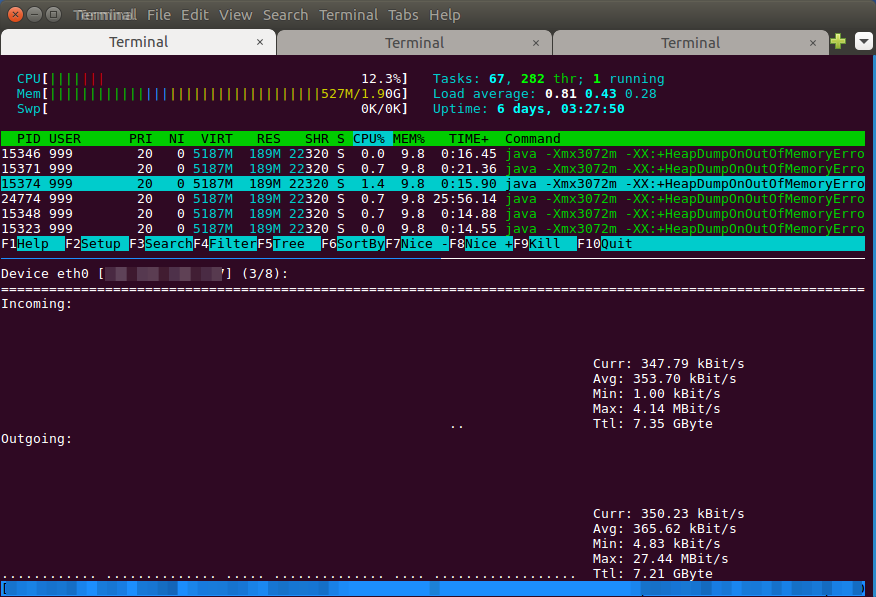 Over the past couple of weeks I’ve been using my own Jitsi instance for many voice and video calls between family and friends. It’s easy to install and use on mobile devices, which is of prime importance when asking others to communicate with you in a different way than how they are used to. One thing that made me raise my eyebrows a bit, however, was the data rate of a simple one to one voice call.

The screenshot above shows the data rate of a PC to PC voice call without video: 350 kbit/s in each direction for both parties. Divided by 2 the data rate per direction is 175 kbit/s including all IP/UDP overhead. It doesn’t sound like much but compared to the HD-voice (G.722.2) codec used in VoLTE that requires around 12 kbit/s, this is huge! Some network operators perhaps even use the HD-voice or the even better EVS codec with a rate of 24 kbit/s. But still, Jitsi’s bandwidth requirements are significantly higher.

Note that the comparison is not quite fair, however, because the 24 kbit/s do not take the IP/UDP/RTCP overhead into account, which is around 40-50%. On the other hand, ROHC removes most of this on the LTE air interface, which it can’t do for Jitsi calls. Another data point: The dedicated bearer for the VoLTE voice data stream is usually rate limited to 40 kbit/s.

A decade ago, this would probably have been hotly discussed. But fortunately, network capacity has made leaps forward since then, and especially in fixed networks, it doesn’t really matter anymore. Voice calls are just a tiny fraction of the data being shuffled through the networks these days, while video streaming pushes the boundary these days.

But still, I couldn’t resist to make the comparison.