I use OpenVPN every day on the move for a number of purposes. Especially in open WiFi environments in hotels and other places it ensures that my data can’t be easily intercepted over the unencrypted WiFi interface. In most situations, however, setting up a VPN tunnel is only a temporary measure, usually for a couple of hours at most. As a consequence I didn’t really have a feeling for how stable an OpenVPN connection is over the long run. Up until now that is.

In hotels the first device I usually unpack is a Raspberry Pi that acts as a Wifi/VPN gateway for all my devices. This way I only have to log into the hotel WiFi once and get all my devices connected to the Internet instantly in a secure fashion.

When I was in India recently, I left my VPN gateway in the hotel room over several days and before leaving I noticed that it didn’t have to reconnect to my VPN gateway a single time over an uptime of 2 days. That speaks not only for the Wifi and Internet connectivity of the hotel but also for the stability of OpenVPN. The picture below shows two terminal windows that show the setup date and time of the incoming tunnel on the server and the status of the network interface on the client side. Over the two days, around 1 GB of data was transferred in one direction and around 100 MB in the other. 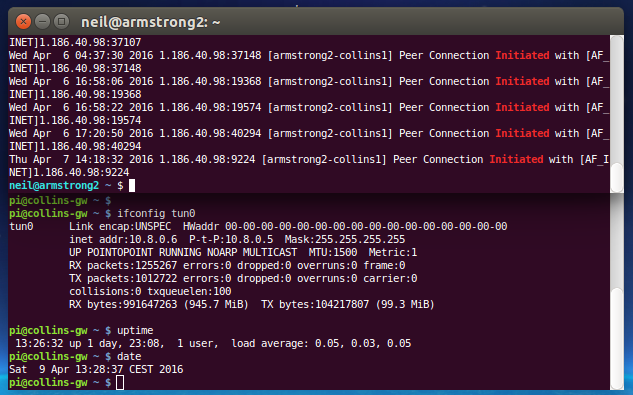