Continuing my mini-series on how VoLTE works in practice I’ve recently taken a closer look at how DTMF tones are transported over IMS. You might argue that DTMF tones are old technology but they are still used a lot today. Examples are entering the PIN to your voicemail system from the phone or sending a conference bridge ID and password over an established connection. In ‘good old’ analog telephone networks DTMF tones were generated by the phone itself and sent as an audible tone over the speech channel. In GSM and UMTS networks things changed and DTMF start and stop indications were transmitted as signaling messages to be interpreted and converted into a real tone in the network. In VoLTE, things have again been implemented differently.

The two screenshots below give a good idea how things look like in practice. The first screenshot shows how a DTMF tone is embedded in an RTP packet while for comparison the second screenshot shows how a speech frame looks like in an RTP packet. I can see how this solution makes sense as everything is digital on the one hand while on the other hand the IMS signaling routers do not need to carry additional signaling messages.

Interesting side note: The “marker” field in the RTP header is usually set to 0. When a new DTMF digit starts, however, it is set to 1. This can be used as a convenient filter criteria in Wireshark to extract DTMF sequences. 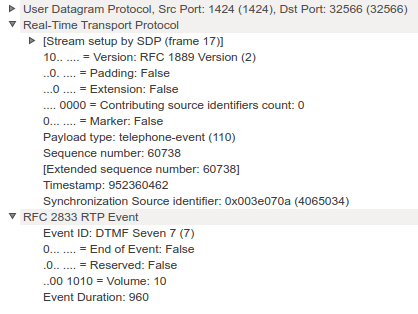 Screenshot 1: An RTP frame with an embedded DTMF signaling message that the user has pressed the digit ‘7’ on the dial pad. 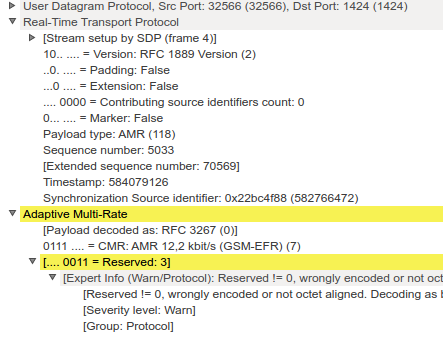 One thought on “VoLTE – Some Thoughts on DTMF”