A friend of mine lives in the countryside at the very fringe of DSL coverage. While a decade ago a 3 Mbit/s DSL line with a 450 kbit/s uplink could still be considered sufficient, things have changed quite a bit these days. Several computers and smartphones are now connected to his network which makes using voice over IP applications such as Skype difficult as especially the uplink is immediately affected when someone else uploads data. Don’t even think about video telephony with a reasonable video quality. Running Skype and desktop sharing simultaneously is also next to impossible, downloading software updates takes ages and streaming HD video has become impossible in many cases. 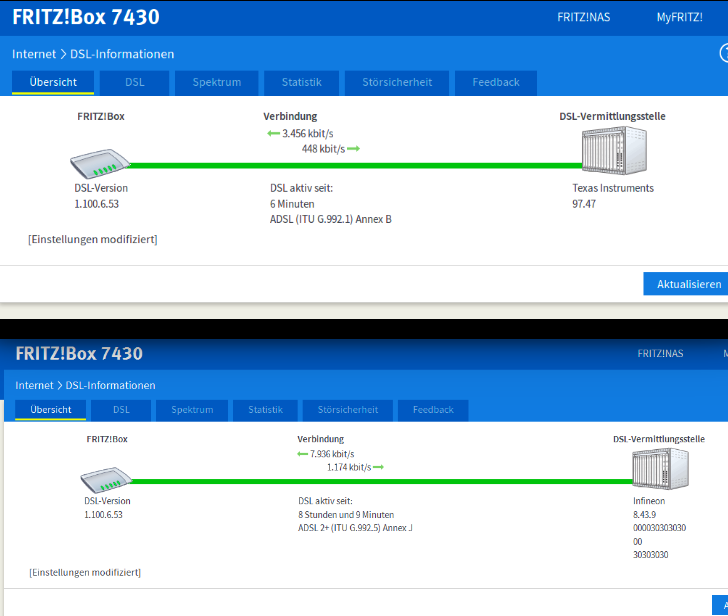 Recently, however, my friend’s DSL line with bundled analog telephony was migrated to all-IP, i.e. voice telephony now also runs over IP. The only benefit I could see when this was announced was that voice quality would be upgraded to Wideband-AMR so I made sure he had a compatible phone by the time of the switch. In addition, I noticed that at the same time, the telephone company switched the line from ADSL to ADSL2+ which brought a huge improvement to up- and downlink speeds. I’m glad I took a number of screenshots of the DSL connection information before and after the switch as they reveal some very interesting details.

The first screenshot on the left shows gives an overview of the line parameters before and after the switch. Initially, the phone line was connected to a Texas Instruments DSL chip and the protocol used for the link was ADSL Annex B (ITU G.992.1). Downlink speeds were 3.5 Mbit/s in the downlink and 448 kbit/s in the uplink direction.

After the switch, the line was suddenly connected to an Infinion DSL chip and the protocol was changed to ADSL2+ Annex J (ITU G.992.5). This means that not only did the carrier change the protocol but his line was also connected to different equipment. As a consequence, transmission speeds jumped from 3.5 Mbit/s to almost 8 Mbit/s in the downlink direction and from 450 kbit/s to 1.2 Mbit/s in the uplink direction. 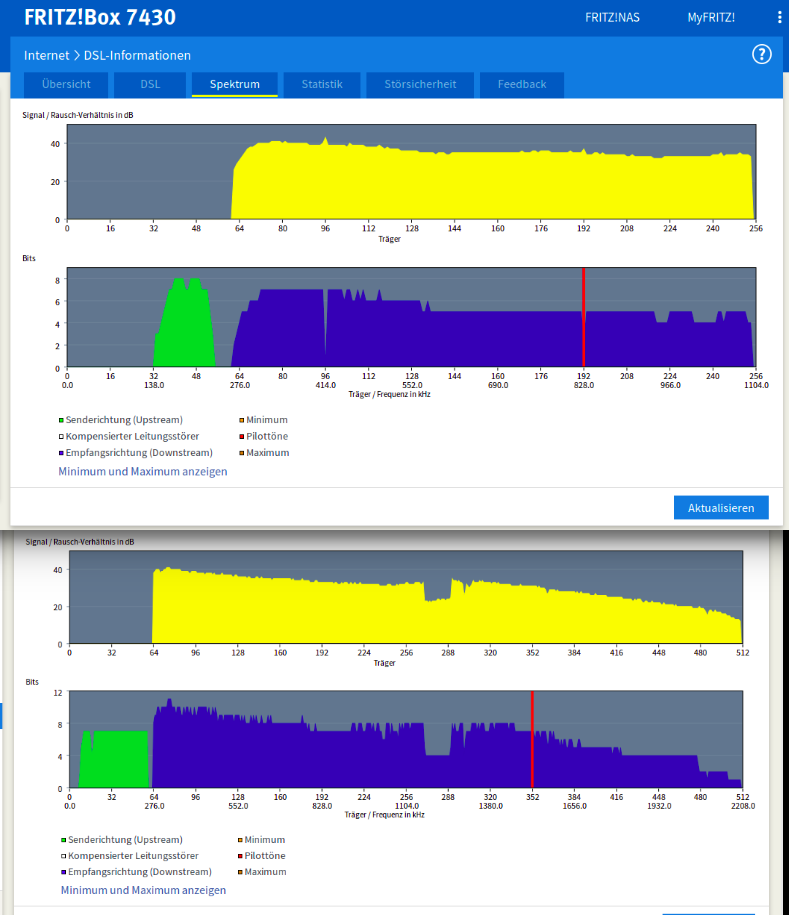 The second screenshot on the left shows why the line speeds are much higher now. The upper two graphs show the signal to noise ratio and line use before the switch, the lower two graphs show how things are now. The first big difference is that ADSL2+ uses an overall bandwidth of 2.2 MHz and 512 tones while the old ADSL only used 1.1 MHz and 256 tones. It’s also interesting to observe how the signal to noise ratio is fairly constant up to around 1 MHz and then gradually gets much worse (yellow graphs).

The second interesting thing is how uplink speeds were increased. The part of the spectrum used for uplink transmissions is shown in green in the graphs. Before the switch the uplink channel only started at 138 kHz (tone 32) as the lower frequency range was used for analog voice telephony. After the switch almost all of the lower frequency range is now used for DSL as well, thus doubling the uplink speed.

Obviously, even 8 Mbit/s in the downlink and 1.2 Mbit/s in the uplink won’t help in the long run but at least for now it’s a significant improvement. Even when a voice call is ongoing and takes around 100 kbit/s of bandwidth in the uplink direction there is still significantly more bandwidth available now for simultaneous other data transfers than before. And even if two traditional phone calls are made simultaneously, which is possible now, the remaining uplink data rate is still twice of what it was before. The coming weeks will show how much of a difference this will make for video calls in combination with desktop sharing.