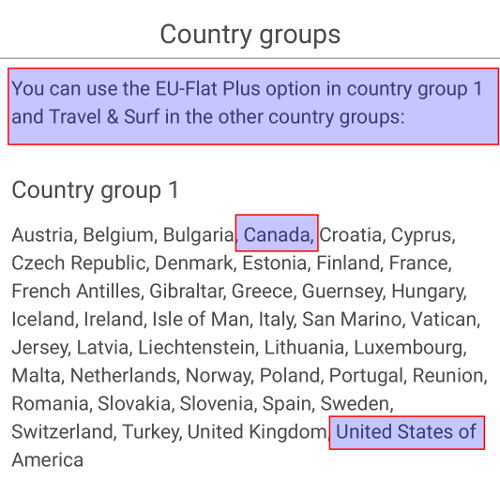 I’m a frequent international traveler, so easy and affordable voice and data connectivity not only at home but also when traveling are obviously very important to me. Recently, things have once again significantly improved as the the US and Canada are now also included in my German mobile subscription.

From today’s perspective it’s hard to believe things were so much different only a little while ago back in the early 1990s: Mobile phones for voice telephony were for the rich and few and the Internet was just about to become popular for the masses. But that was on the desktop and over the fixed line telephone system with modems. Things improved a lot over the years and the radius from home in which mobile telephony and later mobile Internet access were usable without thinking about extra cost kept increasing over the years. At first, affordable pricing was limited to the home country while steep roaming prices limited use abroad to a minimum even if I only went over a nearby country border. Then, roaming prices for voice and data in the EU started to decline mostly due to roaming regulation and also a bit due to competition. Fast forward to 2013 and 2014 when, from my point of view, global roaming for voice and data finally became affordable not only for business but also for private use.

Now in 2017, my flat rate radius for voice and data has once more increased significantly. When recently in the US, the country was, for the first time, included in the list of countries in which I could use my voice and data flatrate I have with my German network subscription. Previously when I arrived in the US I had to book a data pass for around 15 euros that would give me around 150 MB of data for a week. I usually required several of these passes a week plus Wifi in the hotel for the heavy lifting. Now my flatrate includes the US, too, so like when I travel in the EU, I have stopped to even caring about (the usually crappy) hotel Wifi and just tether my notebook and tablet to my mobile phone.

My network operator has also invested in upgrading his roaming connectivity before another upgrade of the EU single market roaming regulation came into effect a few weeks ago. In other words multi-megabit speeds make tethering and mobile use seamless and enjoyable. Yes, delay in the browser is a bit higher compared to when I’m in Europe but that’s no different from using non-mobile (local) Internet connectivity as my services I use on a daily basis (such as the web based interface of this blog) are in Europe anyway.

A great step forward and I’m happy to pay a bit extra for the convenience!