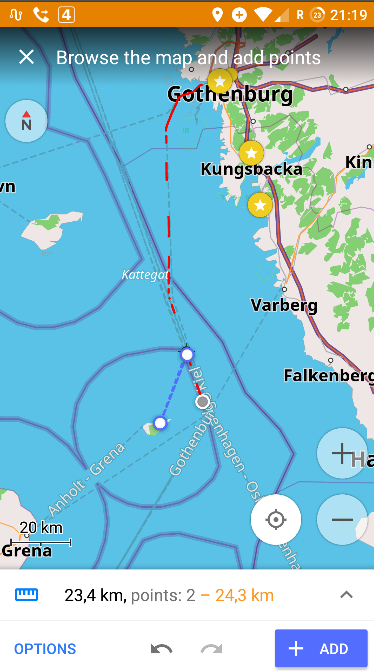 I recently took an overnight trip on a ferry from Gothenburg, Sweden to Kiel, Germany. While they were advertising free Wifi on board, which, not to my surprise, totally failed during the trip, I was looking forward to finding out, if and when I could reach the land based LTE network and get connected. As the ship ventured quite far from land, I wasn’t very hopeful that things would work well.

The Route in Three Parts

When you look at the Gothenburg – Kiel ferry route on OpenStreetMap, you can roughly split the trip into three parts from a connectivity point of view. The first part of the trip follows the coastline of Sweden. At some point the ship then turns starboard, crosses the sea and for quite a few hours is far away from the Swedish and Danish coast. During the final part of the trip, the ship is close to the Denmark again and then finally reaches the German coast. ‘Close’ is a relative term, however, as even when the ship sailed alongside the coast, it was usually 20 km or more away from the coastline. In other words, quite far for LTE.

Part 1 – Alongside the Coast

I spent most of the first third of the trip topside, deck 11 and during that time, despite being 15 to 20 km away from the coastline, which was still visible, LTE coverage was great. Being outside in the open and quite high certainly helped.

After it got dark and after dinner, I was in my cabin, which was at the front of the ship, with a ‘captain’s view’ window as they called it. Inside the cabin I had no coverage on my mobile most of the time, despite it being on deck 9. But another smartphone I put directly at the window serving as a Wifi tethering hotspot always provided a network for my devices even when we went further away then 30 km from the coastline. This really surprised me and then I suddenly realized that I was no longer served from a Swedish network but by Telia Denmark (MCC/MNC 238-20). But where did this come from, we were still very far away from the Danish mainland!? It turned out that the LTE base station must have been on Anholt, a small island just between Sweden and Denmark. The first time I noticed that I had switched networks, the ship was around 23-25 km away from the island as shown in the first screenshot. It looks like the LTE tower on the island has a single cell that covers all 360 degrees as the PCI (Physical Cell ID) stayed the same for the next two hours even as we went around the island. 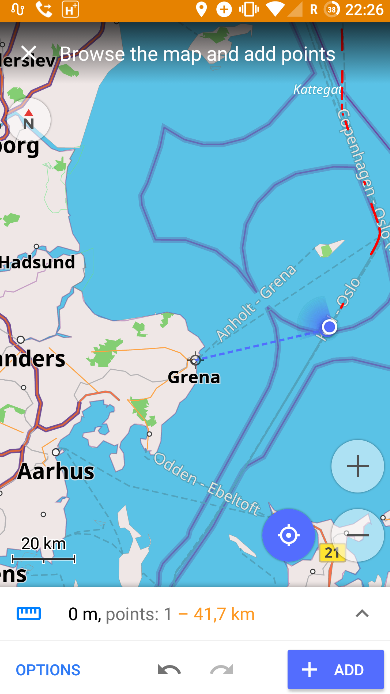 At some point, the PCI switched again and this time, I must have been served from another location, as my cabin window was in front of the ship and Anholt island was already behind the ship. The distance I measured at this point to the coast was almost 42 km as can be seen in the second screenshot. Quite amazing! Another possibility that I can’t rule out, however, could have been that an LTE cell was installed on one of the windmills of the the Anholt Offshore Wind Farm that lies between Grena and Anholt. Should that have been the case, then the distance was shorter.

The next thing of course what kind of data rates I could achieve. I ran some downlink and uplink speed tests at a distance of 25 km and (the potential) 42 km and in both cases I could reach sustainable downlink speeds of well over 15 Mbit/s and sustained uplink speeds of over 5 Mbit/s. I could hardly believe it, but I made quite a number of speed measurement over several hours with my tethering mobile at the window with similar results. Amazing! And in case you wonder which frequency band was used by the LTE cell, it was LTE band 20 with eARFCN 6200, i.e. 800 MHz and the channel bandwidth was 10 MHz.

So by and large I had great LTE Internet connectivity throughout the 14 hour trip, at least with my tethering mobile at the window at the front of the ship. Things could be different in some places if you have a window cabin at the wrong side of the ship and it’s pretty unlikely there is any sort of usable LTE coverage in cabins without a window. In other words, your mileage will vary.

P.S.: A few years ago I might have been inclined to also check out the on-board GSM system but the world has moved on since…