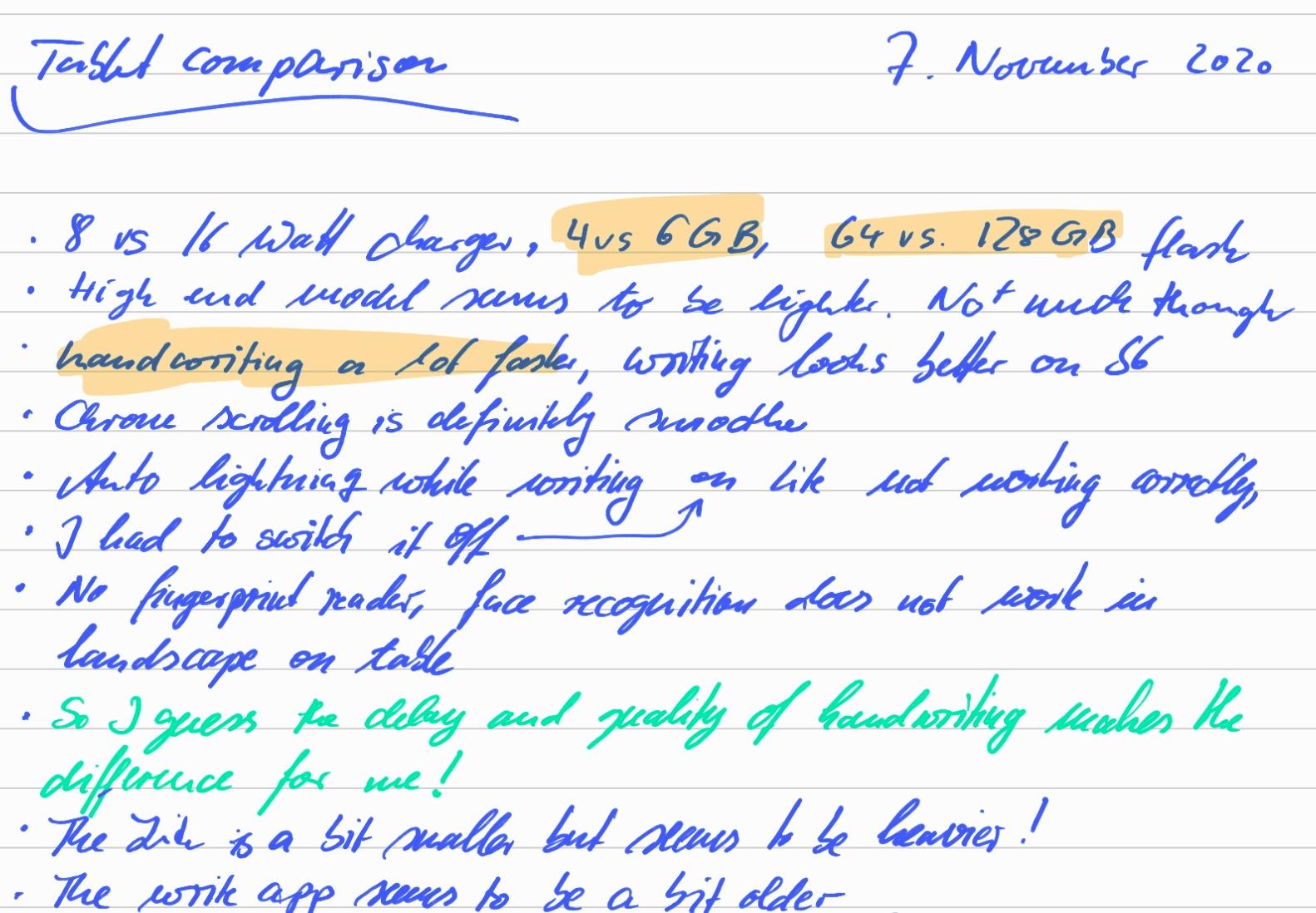 I’ve been using a tablet on and off for many years now. However, it’s been mostly off as I was mainly using this device type for media consumption, i.e. web browsing, videos, reading ebooks, etc. rather than creating content. Recently, however, I’ve taken another look at tablets with a pen and how they can be used in combination with handwriting notes and for annotating PDFs. While entry level tablets can be had for less than 200 euros these days, it looks like those that can handle pens well for handwriting start at around 300 euros. To see what kind of difference price makes in 2020 for the use cases I had in mind, I bought a €650 tablet and another one for €320. Both came with the pen included. I don’t want to mention makes and models here because I don’t think that’s relevant for the comparison. And indeed, the difference is quite noticeable, not only in the details.

Furthermore, the more expensive device comes with a finger print reader which I find quite useful as unlocking works in the low angle / flat reading position as well as in the more angled reading position. The cheaper device resorts to camera based unlock  (in addition to pin and other options) which doesn’t always work in all lighting and usage scenarios. Also, the brightness sensor is on the long side of the lower priced device and especially when writing with the pen, my hand sometimes covers it which dims the display. So I had to switch it off. On the higher end device the sensor seems to be somewhere else and I had no problems with changing screen brightness.

Let’s come to my main applications, taking notes with the pen and annotating PDFs. Both devices come from the same manufacturer but I have the impression that the note application on the higher priced model is newer. Both work fine and I can put down my notes with the pen, colorize the text, include images and export the result. On the higher priced model, writing on the screen is perfect. There is no delay whatsoever, it looks and feels like writing on paper, just less resistance when moving the pen on glass vs. paper. Using the pen with the lower price model also works fine but there is a delay of a fraction of a second before the handwritten text appears on the screen. In other words, writing with the pen doesn’t feel as ‘natural’ as on the higher priced model.

There is also the option to use the pen as part of the keyboard in any application and handwriting is converted to text on the fly. This works great on both models and I was really surprised how well my very cryptic handwriting is recognized. The handwriting recognition software runs on the device by the way, as it still works even if Wifi is switched-off. I’m quite relieved as sending my handwriting to the cloud would have been an absolute deal breaker for me.

For annotating PDFs I chose the Xodo PDF app which worked well with my pen. On both devices I can scroll through large documents very quickly, but there’s a slight but noticeable ‘wave’ distortion of the text when scrolling quickly on the cheaper device. Also, when zooming in and out, text and images on the page look a bit blocky for a fraction of a second. On the higher end device on the other hand, everything is smooth.

After trying both devices for two weeks now I come to the conclusion that I could work with both devices just fine. However, the quality of the handwriting and the almost 0-delay between writing and the virtual ink appearing on the screen are the main reason why I will stick with the higher priced model.