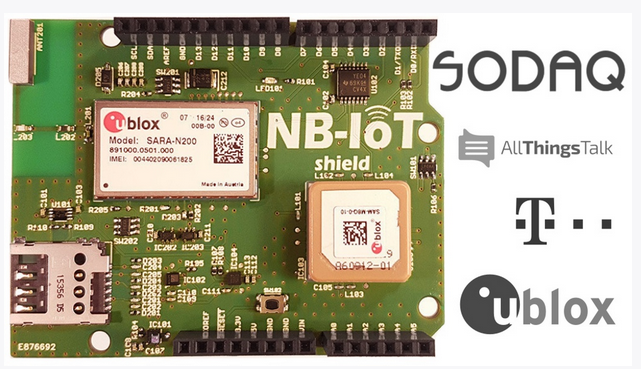 Back in April I wrote a post about a breakthrough Arduino board with a Sigfox chip bundled with a 2 year network subscription. It has since arrived and a number of posts about how it performs in practice will come soon. In the initial post I wrote that in my opinion that’s where 3GPP network operators have to go as well with NB-IoT to drive adoption. Actually NB-IoT seems to be closer to this goal than I initially thought. In the Netherlands, Sodaq is working on a NB-IoT Arduino shield and has started a Kickstarter campaign to get funding for it.

In the campaign details they mention that their NB-IoT Arduino shield will come with a T-Mobile Netherlands SIM card and a 1 year T-Mobile Netherlands subscription and access to the AllThinksTalk platform for 45 euros. The price is similar to the Sigfox Arduino but doesn’t include the Arduino itself.

Network connectivity is only included in the Netherlands so far while the Sigfox Arduino includes connectivity for all European countries in which Sigfox networks operate in the 868 MHz band. While the Sigfox Arduino is already available, the NB-IoT Arduino Shield of Sodaq is not quite available yet, but the estimated availability date is June 2017, so not that far away either.

And who knows, perhaps other network operators will jump on the bandwagon and offer included subscriptions as well. There is no better way to spur adoption than to give out free time limited network access in combination with an easy to use prototype board to early adopters!