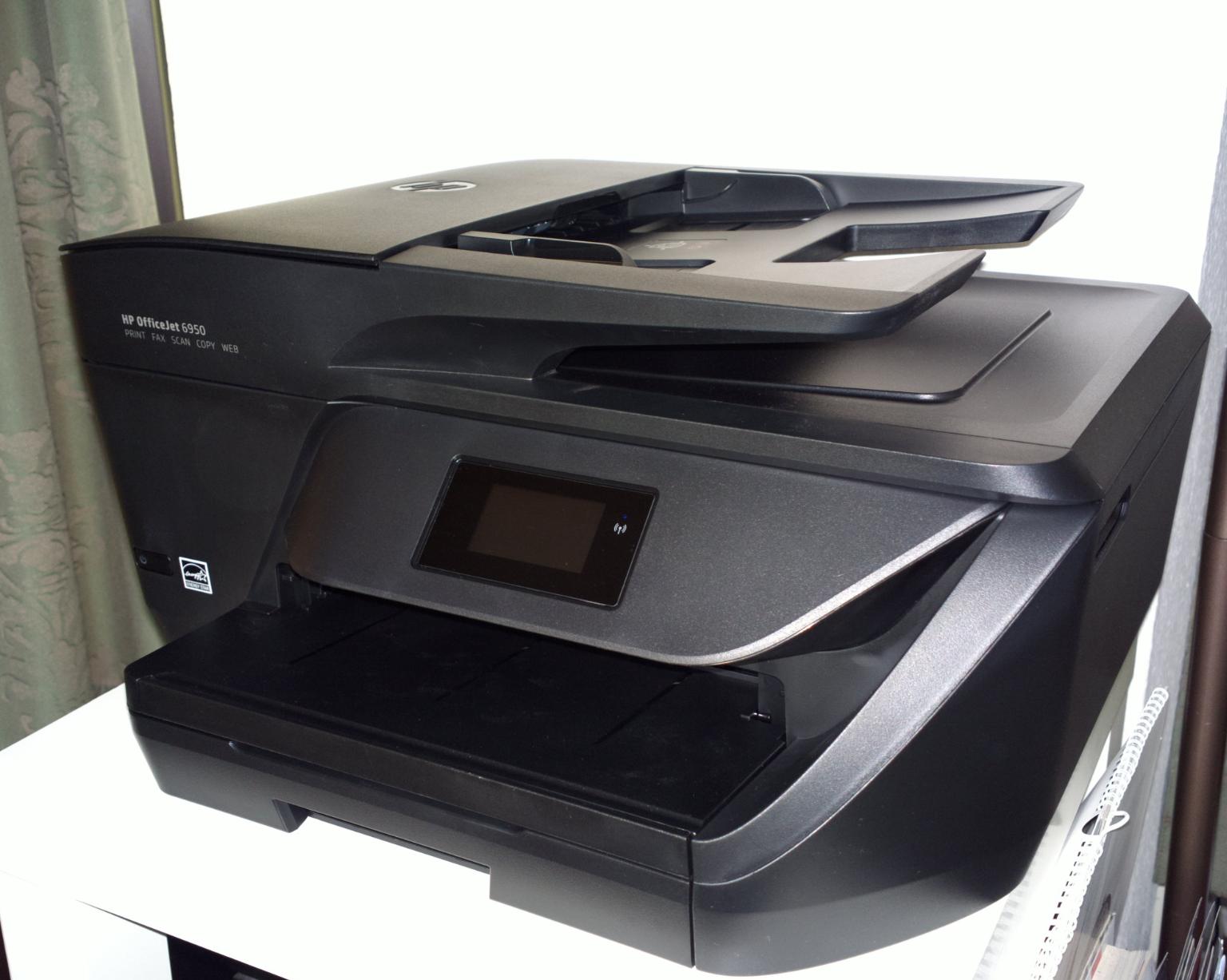 It’s over 10 years now that I bought my first printer + scanner device with a Wifi interface, an HP C7280. I’ve had it ever since and it was doing a great job over the years. These days, however, my scanner software often only finds the device over the network after many retries and the quality of the scans are markedly deteriorating and wouldn’t much improve even after cleaning the optical components. Also, I’ve had a few ink leakages over the years of which I’m not sure if it was the fault of the printer or the 3rd party cartridges. So it was finally time for a replacement which was a good opportunity to make a comparison to the C7280 to see what has changed in the last decade.

Which Printer/Scanner to Buy?

Since I run Linux at home a new printer/scanner combination has to have good support for my setup. Pretty much all printer vendors today offer drivers for Linux but most of them are proprietary and closed source and I’m not very keen of running such software on my computers. HP is an exception as their Linux drivers and software (hplip) are fully open source and GPL licensed except for a few of their models which require a binary blob. In addition, Debian and Ubuntu have hplip in their repositories, so HP printers and scanners are supported out of the box.

There are lots of different HP makes and models and after comparing them for a while I chose the 6950 from the HP OfficeJet 69xx range. At €89 including tax it was the cheapest in the 69xx range and I specifically went for this model as I don’t need a color display, Ethernet port or a USB port in front to print from memory sticks which are included in the slightly higher priced 6960 and 6970 models. €89 is only a third of the price I paid ten years ago for the C7280. The C7280 had some options the 6950 doesn’t have such as a color display, an Ethernet port at the back and memory card interfaces at the front but I never needed them over the years.

Currently, I’m running Ubuntu 16.04 LTS which comes with a rather old hplip version in the repositories from back in 2016. Despite this, it was no problem to get the printer part working with the driver of an older device series (the OfficeJet 6800) but XSane would not detect the scanner part. Downloading and installing the latest hplip version via the HP website fixed this in a couple of minutes. While the HP software is open source I still prefer not to have it running in the background and fortunately it is easy to disable the tray icon and info pop-ups and to prevent the software from starting at power up by removing it from the startup applications.

When the printer is powered up for the first time it asks via its display whether it is o.k. for it to send statistical data to HP. Thanks, but no thanks! Also, I later disabled direct Internet access for the printer on my router as I definitely don’t need or want any web printing services and also to make sure stealth software updates won’t break functionality such as the use of 3rd party ink cartridges in the future (again).

So far, so good. Other things I really like about the 6950 is that the internal paper tray holds up to 225 sheets of paper which is much more than the C7280 could.

To connect the printer to a Wifi network the monochrome display can be used to select the network and enter the password. This works surprisingly well and except for the power button, there is no other button on the device. Everything is done via the touch sensitive display which reacts swiftly to touch and swipe events. That’s a significant difference to the C7280 which had lots of buttons on the front panel and came with front panel overlays in different languages. It probably reduces cost quite a bit, too. Despite the small size of the display, short animations explain how to do things like changing ink cartridges. Very nice!

Despite being a bit smaller than the C7280, the OfficeJet 6950 comes with a built in duplexer for two-sided printing. I don’t use the functionality a lot but it’s good to know it’s there for special cases.

Once the printer is connected to the Wifi network it can be configured over a web interface as well which looks quite nice. The web interface uses https and a self-signed certificate that is valid for the next 20 years (yes, I checked…).

Power consumption in standby seems to be refreshingly low, quite something has happened here in products over the last decade. The product specification lists a power consumption in sleep mode of 1.2 watts. That’s around 10 kWh a year or around 25 cents on my power bill per month to leave the printer in standby around the clock.

While I’m overall very happy with the 6950 there are a number of things about which I’m not really excited about. By default, Wifi-Direct is activated with a standard password. In other words, all my neighbors could see that I bought a new printer and send me their pictures to print. A bit too promiscuous for my taste.

One thing I really found annoying is that HP offers no software update so far that protects from KRACK Wifi attacks. Their only advice is to disable WPA TKIP on the the Wifi access point which doesn’t seem to help much to mitigate the problem or to disable Wifi and use the printer over USB. This would have been a showstopper if other vendors would have done a better job with this. Very disappointing!

Before I disabled Internet access for the printer I ran a manual software update. Unfortunately I couldn’t find any release notes for the software which is quite disappointing. Without transparency, that was the last software update that printer gets.

Another thing which is a bit irritating, but perhaps not the scanners fault, is that I now have to select manually between flatbed scanning and using the automatic top feeder in XSane. With the C7280 this was automatically detected. Also, when I put several pages to scan into the top feeder but only (accidentally) select 1 page to scan in XSane, only one page makes it into the program but the scanner still scans all 3. This was better with the C7280 for which XSane  would scan exactly the number of pages selected in the GUI. 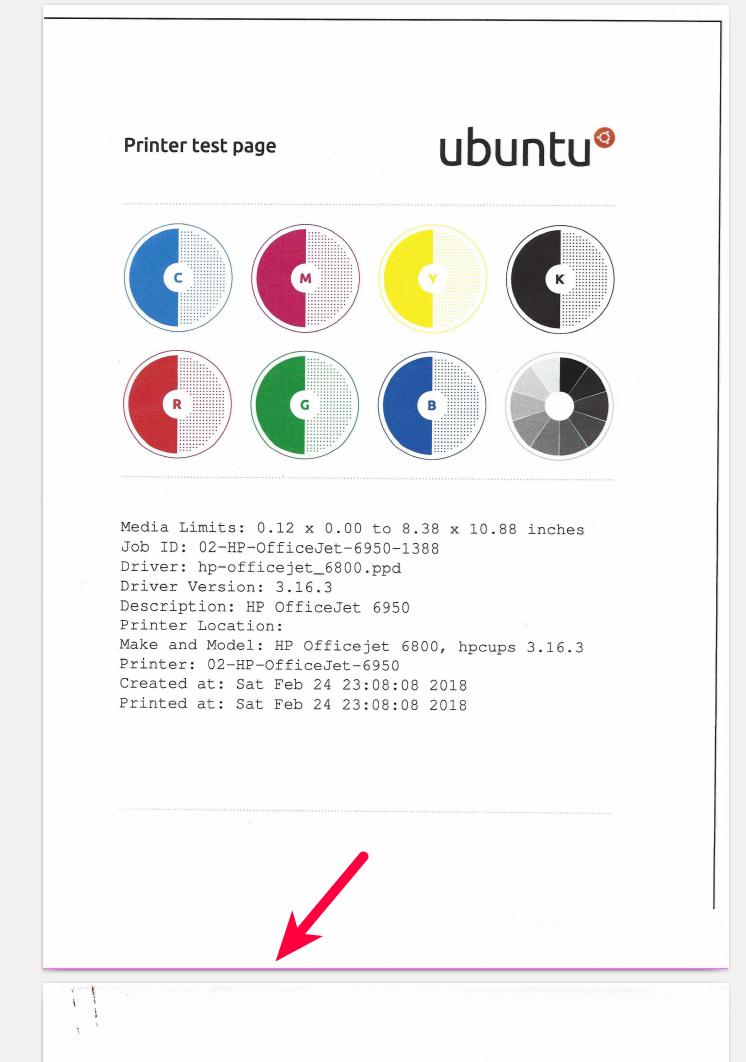 Which brings me to my final point I don’t like: When using the top automatic document feeder, a pink stripe appears at the bottom of most pages as shown in the picture on the left!? I played around with the settings in XSane for several hours but the problem would not go away. Things work fine if I use the flatbed for scanning but the stripe consistently shows up with the top feeder. I’m not sure at this point if this is the fault of the scanner or of the software but I never had this issue with the C7280.

So apart from the pink stripe issue I quite like my new printer/scanner combination (it still has a FAX option but it’s 2018, so I won’t bother…). At a 3rd of the price compared to a similar device from 10 years ago it was easy to install on Ubuntu Linux and I laud HP for their fully open source printer and scanner drivers and GUI software!