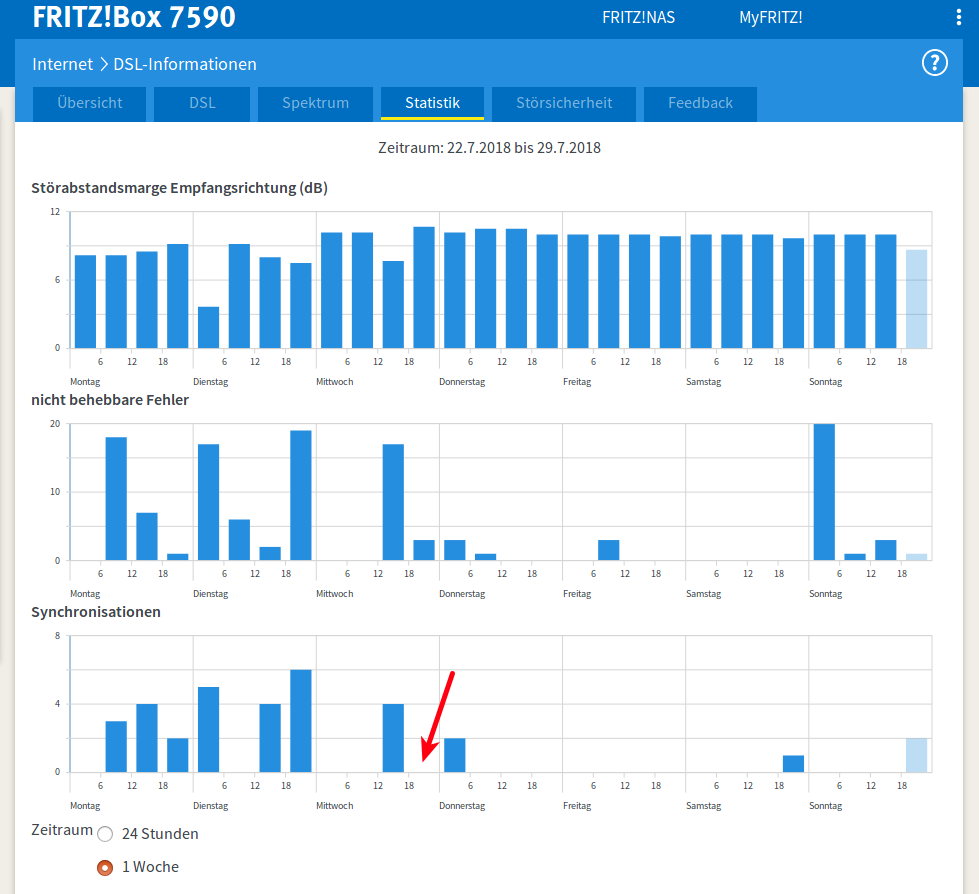 Sometimes, progress comes at a price. Back in June, my DSL line got ‘vectorized’ and based on what I could see in my DSL router, there was hope to get a significant speed boost in uplink and downlink from the 50 Mbit/s and 10 Mbit/s I had subscribed to so far. After vectoring was activated I noticed, however, that the line was not as stable anymore as it used to be. Unlike before, when the connection was stable over many weeks, the router now re-synchronized with the DSLAM once every few days. Despite this, I decided after about a month to upgrade my subscription to 100 Mbit/s downlink and 40 Mbit/s uplink speed, as I was really keen to get the higher uplink speed. Unfortunately, things started to go seriously wrong after the upgrade.

After changing my subscription, it took about a week before my line was ‘software upgraded’. After activation, I could see that the increased signal to noise ratio I got after vectoring was activated compared to the previous non-vectored connection was used to increase the line speed. I now got the advertised 100 Mbit/s speed in the downlink direction and around 36 Mbit/s in the uplink direction. That was really great! The SNR level is now where it was before vectoring was activated. Unfortunately, at the same time, the re-synchronization issue got worse and worse and I soon had several re-syncs per day.

Obviously this is far from ideal under any circumstances, especially because I run quite a number of servers at home which started to become unreachable several times a day for several minutes. Especially for large file transfers and long-living VPN connections, that’s an absolute disaster.

As things were not getting better, I decided to activate plan B and switch my cloud to my LTE backup connectivity. At 40 Mbit/s downlink and 40 Mbit/s uplink speed (measured during busy hour), this connectivity is more than adequate to support my services for some time. You can imagine how glad I was to have a plan B and to be able to just activate it and get some breathing space to debug the DSL line.

To make sure things were not broken on my end, I bought another DSL router, since I needed one for extra redundancy anyway. It didn’t do any good, however, as the issue persisted. Next, I changed the telephone cable, connected my cloud to another power socket, changed Ethernet cables and disabled all non-essential services. Unfortunately, all was to no avail and the resyncs continued to happen frequently.

The Thing With The Neighbor

Time to call customer support. After a line reset at their end that didn’t help, a technician was scheduled to come over two days later. In the meantime, a neighbor told me that she also had issues with her DSL line since she upgraded. After taking a look at her DSL router logs, I could see that she had the same problem but even worse. 20 re-syncs a day on her line was not an exception and she also opened a ticket in the meantime to get help.

Fixing Things – One Step At A Time

I have to say I was a bit afraid that this would be a difficult issue to fix. In general, the line looked absolutely perfect to me. The SNR level was o.k., no errors on the line and then, suddenly, out of the blue, a DSL re-sync. The technician also couldn’t find anything on our lines despite bringing measurement equipment and running many tests over the course of an hour. In the end, he did what is usually done when the line checks out fine, he changed the port in the DSLAM. In a first instance, he only rewired the port of my neighbor to a different port. This immediately made a big difference as the number of resyncs went down to around one every two days. Still not perfect but we were getting somewhere. In a next step my line was also changed to another port and since then my line resets were further reduced to about one per week. The picture at the beginning of the post shows how things looked like before and after with the red arrow indicating when my neighbors port was rewired.

A Word On LTE Stability

In the meantime, my cloud services ran over my LTE backhaul for a good 10 days without a line glitch and I’m mightily impressed with the stability of the LTE network. At the same time, my DSL line issues have shown how sensitive copper lines have become when it comes to cross talk and other RF issues. How I wished we could finally get fiber into the house…

2 thoughts on “Frequent Vectoring Resyncs Make Me Activate Plan B”