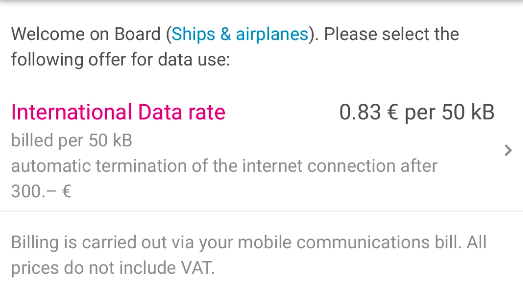 When I was recently on a long-haul flight I accidentally didn’t activate flight mode on my smartphone and to my surprise the device registered to an on-board 3G network of AeroMobile once we were at cruising altitude. I was really glad my home network operator of choice has a landing page to block mobile data outside the EU until I confirm because as I already discussed here, 2G/3G/LTE mobile network use on planes and ships is still super expensive. Calling a price of close to one Euro per 50 kb of data ‘modern piracy’ is probably an understatement.

So how did I know the network was operated by AeroMobile? One indication was that this is the network name shown on the display. In the network monitor, I could further see that the Mobile Country Code and Mobile Network Code was 901 14, which, according to Wikipedia, has been assigned to AeroMobile.