I haven’t had a lot of speed test reports over the past few years on this blog because frankly, whenever I have LTE coverage these days, sustained data rates are usually well beyond 10 Mbit/s and thus usable for most things I require Internet access for. In other words, I’ve stopped bothering. Besides that, a little problem these days when doing high data rate speed tests is that they eat through my monthly data volume really quickly, especially when doing large file downloads to see the sustained data rates. Fortunately my network operator now has a 24h option for unthrottled and unlimited data transfers for a few euros. So when I had to use the option a couple of days ago I decided to run a speed test in the evening at round 8 p.m. at my home in the center of Cologne to see what the network delivers during peak time to a single user. 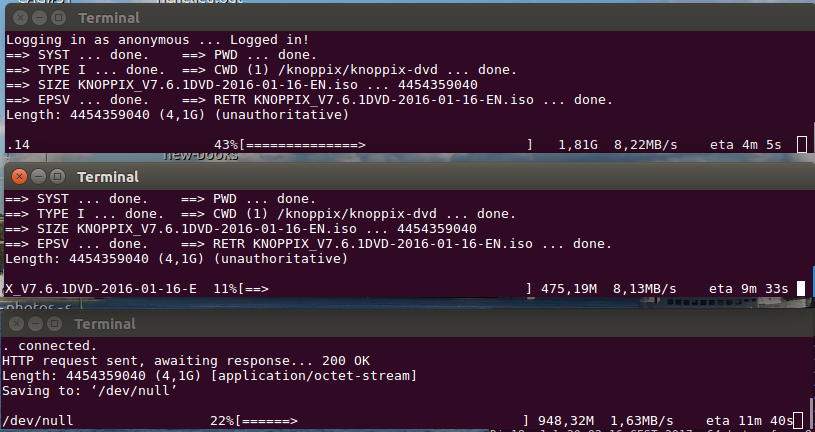 As can be seen in the two screenshots I could get a sustained data rate of well over 21 MB/s in the downlink direction which is around 170 Mbit/s. Pretty impressive for a non-lab situation. In the center of Cologne the network was on air in several frequency bands. For my speed test I used a Samsung Galaxy S6, which is already over 2 years old and supports only ‘limited’ 2 Carrier Aggregation, in this case 20 MHz at 1800 MHz (band 3) and a further 10 MHz also in band 3. Yes I know, the main benefit of carrier aggregation is network capacity and not higher individual user data rates. However, at least for the moment, network load is still at a level for Carrier Aggregation to result in data rates that can’t be achieved with a single 20 MHz carrier alone (150 Mbit/s with 2×2 MIMO, 64QAM and an antenna in line of sight and very close).

To close let’s have a quick look back to 2011: Back then I was excited about 16 Mbit/s which at the time was the sustained speed I measured (Over 3G). Today, the throughput I measured is 10 times higher than back then!