Last year I wrote about my first experiences with the European In-Flight Internet system. I came away quite impressed at the time despite only using a significantly rate limited option. When I was recently on two flights again that had the system installed, I decided that I would give the top-tier 15 Mbit/s option a try. 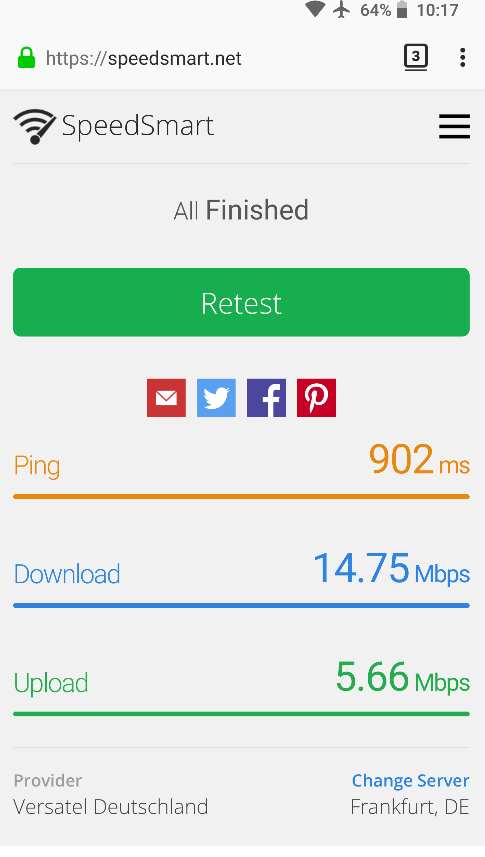 The option to get this speed costs around 11 euros per flight, quite hefty for most European flights as they usually take less than two hours. But there’s also an option to pay via the accounts of some Wifi and mobile network operator subscriptions. In my case I could be billed via my mobile subscription and the 15 Mbit/s option was available for one euro per ten minutes. For a flight that takes an hour and a bit, that’s cheaper than the 11 Euro option that has to be paid with a credit card.

So how fast is this highest tier option? I was surprised to see that I actually got the 15 Mbit/s in the downlink direction and 5.5 Mbit/s in the uplink direction. Web browsing still felt a bit sluggish, however, due to the 900 ms round trip delay time. Sounds a bit high for a combined ground based + satellite Internet connection.

To see how stable the connection was I decided to watch a 30 minute Youtube video on my mobile device which only uses a fraction of the available bandwidth but does frequent downloads so data interruptions would show pretty quickly. The video streamed perfectly, no interruptions and the video only stopped a minute or two before the landing. A very smooth experience indeed!

That was on a Wednesday. When I tried the same thing again on my way home on Friday afternoon the result was a bit mixed. While I could sometimes get the 15 Mbit/s in the downlink direction when running a speed test, the test got stuck at other times. Also, Youtube videos did not play without interruptions. So I tried downloading some files to see what the sustained data rate would be and I came out at around half a megabit per second. Still good enough for web browsing and messaging, but I could have had that with one of the cheaper options as well.

Disclaimer: I work for one of the companies involved in EAN. I am not involved in this project, however, and the opinions mentioned in this post are my own.